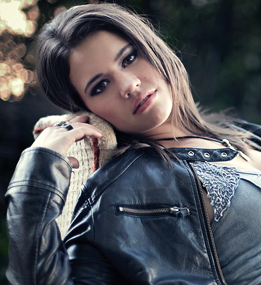 Expectations for aspiring teenage singers are fairly well defined thanks to a pop culture that seems to be saturated with them. The list starts with a charming vocal ability, some stage presence and a bit of charisma. Eighteen year-old Rachel Farley definitely possesses all of these characteristics, but where the young Georgia native stands out from the rest is that she also exudes an undeniable air of strong, yet humble confidence, tenacious independence and songwriting that radiates wisdom beyond her years.

When stacking attributes in an attempt to define RED BOW Records Rachel Farley and her music, many qualities quickly step to the fore: Strength. Purpose. Conviction. The rest is almost baseline, a foundation upon which rests her single most unexpected characteristic: Artistry.

Rachel’s cohesive sense of self, message and mission casts everything else in sharper relief. Her powerful voice becomes an oak-cured alto equally adept at gut-punch emotion and fire-breathing raucousness. Years spent performing with and learning from Brantley Gilbert, Colt Ford, Luke Bryan, Jason Aldean and more seem to be the apprenticeship of a craftsman. And a fearless honesty amplified by personal tragedy render all but truth inconsequential in the songs she writes. For Rachel Farley, life and music are much too real and much too raw to be forced into a box.

After all, it’s not often a 18-year-old breaks onto the scene with a fully formed worldview. “You can be tough and a strong person without being a bad girl or mean,” she explains. “You don’t have to be a push…