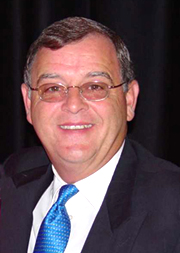 Sandy Lee Watkins was born January 6, 1952 in Paso Robles, California. He passed away on August 28, 2010 in Santa Barbara, CA while attending a conference for Henderson County, KY.

Sandy Lee was elected Henderson County Judge/Executive in November 1994 and continued to hold that office for 16 years until his death. Sandy and his best friend, Cecilia Sue “Susie,” were married in 1970. They have two adult children, Christian and Matthew, and two grandchildren, Kimberly and Sarah.

Sandy was a graduate of Henderson County High School and attended the University of Evansville and Henderson Community College. He was the first recipient of the Honorary Associate of Science Degree from the Kentucky College of Technical School.

Sandy’s forward thinking attitude for Henderson brought him the prestigious 2006 National Association of Counties Courthouse Award for innovative government, an award that only two other counties in the United States received.

Sandy was a dedicated and committed leader to many associations and organizations on the state and local level. He was always looking for the next endeavor to help forward his beloved 42420 as he fondly referred to Henderson. His first interest was always benefiting the average citizen and children.

This tireless leader always made room for fun. His booming personality lit up a room and there were many “Sandy-isms” that kept friends and the public laughing when something needed his levity.

Sandy’s favorite past-time was attending songwriter’s festivals with beloved friends across the country. He was an avid fan and beloved friend of “hometown boy made good,” Kerry Kurt Phillips. Sandy attended the first songwriter’s event in 2010 and was looking forward to this event putting Henderson on the map again with yet another big national event.