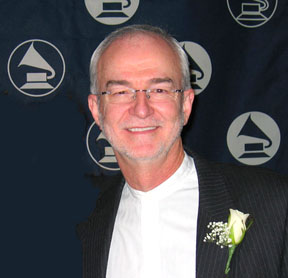 Multiple Grammy award winner, Carl Jackson, was born in the small town of Louisville, Mississippi on September 18, 1953. By the time he was eight years old, thanks to his father’s influence and a burning desire inside, he was already well on his way to being an accomplished musician.

At age fourteen, after playing backstage at a local concert for Jim and Jesse McReynolds, he was asked to be a Virginia Boy by the bluegrass greats and soon found himself on the stage of the Grand Ole Opry. He played banjo for Jim and Jesse for almost five years before joining The Sullivan Family for a short time as a guitarist. Carl then broke away and journeyed to Columbus, Ohio to form a group called “The Country Store” with close friends Jimmy Gaudreau, Bill Rawlins, and the late Keith Whitley. The band in its original form would last little more than a week, for just around the corner lay another big break for the boy from the hills of Mississippi.

Glen Campbell came into town to play the state fair and being huge fans of his, Carl and Keith went out to see the show. Afterwards they ran into Glen’s banjo player, Larry McNeely, who persuaded Carl to come by the next day for a jam session. After picking for a while, Larry suddenly told Carl he had been looking for someone to take his place with Glen because he was tired of traveling and that Carl was the man. Larry took him to meet and play for Campbell and Glen hired him on the spot. For the next twelve years, Glen featured Carl everywhere he went as “the greatest banjo player in the world”.

During his years with Glen, Carl started to concentrate on his vocal and songwriting abilities as well as his musicianship. He recorded two albums for Capitol Records, (“Carl Jackson: Banjo Player” and “Old Friends”), three for Sugar Hill, (“Banjo Man: A Tribute To Earl Scruggs”, “Song Of The South”, and “Banjo Hits”), and then in 1984 his signing with Columbia Records produced a couple of top forty country songs, (“She’s Gone, Gone, Gone” and “Dixie Train”).

Jackson’s “Little Mountain Church House” was voted the 1990 International Bluegrass Music Association song of the year and a more recent version by George Hamilton IV was a 2005 Dove Award nominee for bluegrass song of the year. On February 25th, 1992, for his album with John Starling entitled “Spring Training”, Carl was awarded his first Grammy. A few months later he received a Dove Award for southern gospel song of the year, “Where Shadows Never Fall”, recorded by Glen Campbell. The beautiful ballad, “No Future In The Past”, by male vocalist of the year Vince Gill was a huge songwriting success for Carl and was named the #1 Country Song of the Year for 1993 by Radio & Records magazine. In 1998, after hearing Carl’s demo, Garth Brooks decided to include the Jackson spiritual entitled “Fit For A King” in his “Sevens” project. All in all, Carl has had hundreds of his songs recorded, with sales in excess of forty million units. A poll conducted by Bluegrass Unlimited Magazine several years ago found Carl to have written eight of the top 200 bluegrass songs of all time.

Carl has two great writer’s CD’s along with pals, Larry Cordle & Jerry Salley, entitled “Against The Grain” and “Lonesome Cafe”. He is also the producer of the critically acclaimed tribute to the late Gram Parsons called “The Gram Parsons Notebook”, available on Shell Point Records.

Speaking of Merle Haggard, Carl played guitar, as well as sang and produced all the harmony vocals on Hag’s release, “The Bluegrass Sessions”, except on one song. Alison Krauss joins Carl and lends her angelic voice to “Mama’s Hungry Eyes”.

Carl lends his talents to the brand new Brad Paisley project, singing harmony on the title track, “This Is Country Music”, as well as “A Man Don’t Have To Die”, along with the awesome, Sonya Isaacs. He is also featured, along with Marty Stuart and Sheryl Crow, on the bluegrass gospel classic, “Life’s Railway To Heaven”, not only singing some high lonesome tenor, but also soloing on five string banjo.

In October of 2011, another stellar project produced by Jackson was released to the public and is currently getting rave reviews across the country. “Mark Twain: Words & Music” tells the life story of the great Samuel Clemens and contains magical musical performances by Emmylou Harris, Doyle Lawson & Quicksilver, Rhonda Vincent, Bradley Walker, The Church Sisters, Sheryl Crow, Brad Paisley, Marty Raybon, Val Storey, Vince Gill, Joe Diffie and Ricky Skaggs, as well as narration by Garrison Keillor, along with Jimmy Buffet, as the voice of Huck Finn, and non-other than Mr. Clint Eastwood, as the legendary Mark Twain. Carl even performs a song himself, entitled “Safe Water”, co-written with dear friend, Jerry Salley.

On December 26th, 2011 the state of Mississippi honored Carl with an official Country Music Trail Marker in his hometown of Louisville. The beautiful marker, which highlights Jackson’s career, stands within a stone’s throw of the historic Strand Theatre. Carl performs his annual “Home For Christmas” concert every December in the very building where he used to see movies as a kid, not to mention being born on the third floor, which housed a clinic back in 1953.

Carl’s latest project, released in early 2013, is a beautiful collection of hymns played on twelve different guitars. Classics, such as “Wayfaring Stranger”, “The Old Rugged Cross”, and “When They Ring Those Golden Bells” are performed in his own elegant finger pickin’ style. The recording also includes the story behind each instrument in Carl’s very own words.

Since those days in Mississippi fifty some odd years ago, two-time SPBGMA songwriter of the year, Carl Jackson, has realized many of his dreams. But with each dream that becomes a reality, a new dream lies ahead………..