Nashville performing songwriter Rachel Owen has been described as, “the ultimate saloon singer,” the “Mae West of Rock N Roll,” and a “real-live crooner.” She has been compared to Lucinda Williams, Nanci Griffith, Diana Washington, and Dusty Springfield.  Her songs are often simultaneously funny, poignant, and captivatingly beautiful–creations that can only be described as her own. 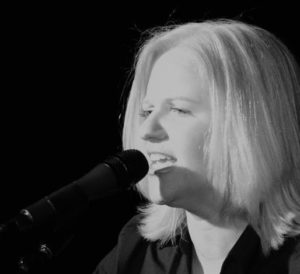 The Walton, Kentucky native began performing music professionally while studying Communications and Advertising at the University of Evansville in Indiana, playing at college hangouts and at biker bars, where she began honing her craft among the thirsty.  Her original radio show, “Folkways” on WUEV was a weekly favorite in Evansville at the time.

In the mid-90s, she moved to Nashville and quickly became an esteemed member of the tribe of talented singer-songwriters who throng there.

Her first foray into the studio was the 1998 release “Steering With My Feet,” a collection of quirky originals that earned her an underground following and invitations into living rooms, coffee houses, and small venues all over America as a one-woman show.

Rachel followed with two other full CDs. 2006 saw the Triple A release of “Bombshell” on Dr. Earl Music, the true essence of Rachel Owen–candid, edgy, and brimming with humor while profound and beautifully presented in her co-production with acclaimed performing songwriter Gordon Vincent.

Her most recent release, “Beautiful Things” (Oct 2016,) reflects Rachel’s love for pop songs from the 40s, 50’ & 60s through original songs that pay homage to classic styles woven with inevitable Rachel Owen weirdness. Self-produced and quietly released (rachelowen.bandcamp.com), this collection features some of Rachel’s best work accompanied by musicians who have worked with Chicago, Prince, Alex Chilton and Don Williams.

Rachel has opened for such revered songwriters as Christine Lavin (with sister Stacy as The Owen Sisters), Todd Snider, Loudon Wainwright III, and Steve Forbert.  Her emotive, fun, and engaging live performance is not to be missed!