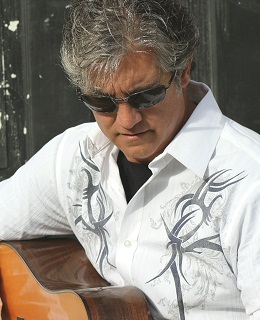 Referred to by Billboard Magazine as “one of Music Row’s greatest veteran tunesmiths,” Jerry Salley – the 2003 “SESAC Country Music Songwriter of the Year” – has had over 340 songs recorded in his multi-award winning career.

From Sir Elton John’s only chart single to appear on the Billboard Country Chart (“Where We Both Say Goodbye” – duet with Australian artist Catherine Britt) to a Gospel song so popular it has been included in Church Hymnals (“His Strength Is Perfect”); from songs recorded by country music legends Loretta Lynn, The Oak Ridge Boys and Gene Watson to some of today’s big- gest country stars like Reba McEntire, Toby Keith and Brad Paisley, Jerry’s long list of accomplishment’s speaks for itself.

Born in the small Southern Ohio town of Chillicothe, he signed with Performing Rights Organization SESAC at 18 years old. Writing and singing in Nashville since 1982, he has written multiple hits in country, bluegrass and gospel music and may well be the most successful songwriter to have earned equal recognition from all three genres of music – not to mention his recent activity of songs/awards recorded by some of the best/current artists in the “Americana” music genre.

His country hits include the Reba McEntire smash “I’m Gonna Take That Mountain,” “Breakin’ New Ground,” (Wild Rose/Universal Records) “I Fell In The Water,” (John Anderson/BNA Records) “How Do You Sleep At Night,” (Wade Hayes/DCK/Columbia Records) and four other Billboard chart records. His has written Three No. 1 gospel hits, several No. 2 gospel hits and over a dozen other top ten/top twenty gospel songs. In addition to songs recorded by the previously mentioned artists, he has had songs recorded by Patty Loveless, Joe Nichols, Darryl Worley, Travis Tritt, Tracy Lawrence, Neal McCoy, Mark Chesnutt, Cece Winans, The Whites, and many others. He is a six-time Dove Award nominee, having won a prestigious Dove for the 1990 Inspirational Song of the Year “His Strength Is Perfect,” recorded by and co-written with Steven Curtis Chapman.

Internationally he has penned no less than seven No. 1 Country hits in Australia just since 2001. To date Jerry’s songs have sold in excess of 14 million records worldwide.

As an artist, Jerry has performed on numerous stage shows, including the honor of performing as a soloist many times on the world famous Grand Ole Opry. His television appearances include Late Night with David Letterman, Regis and Kathie Lee, NBC’s To- day Show and several different TNN (The Nashville Network) shows. In 2011 Jerry was the first American “presenter” on the Australian Country Music Associations nationally televised Country Music Awards show in 13 years – the last being Charlie Daniels.

In addition to his Dove recognition from the Gospel Music Association, Jerry has received numerous awards from different associations for his songwriting accomplishments (IBMA, NSAI, SESAC, Gospel Voice Magazine, etc.). In 2006, Jerry received his second IBMA Award for his contribution (as an artist) to the 2006 IBMA “Album of the Year” – “Celebration of Life” (Skaggs Family Records).

Along with friends Carl Jackson and Larry Cordle, the trio (Cordle, Jackson & Salley) recorded the song “You’re Running Wild” on the Louvin Brothers Tribute on Universal South Records, which features numerous country music stars singing songs made fa- mous by the legendary duo. Entitled “Livin’, Lovin’, Losin’ – Songs Of the Louvin Brothers,” this project won the 2003 Grammy for Country Album Of The Year.

In 2007, Jerry released his first solo project, “New Songs, Old Friends” on the Mountain Home Records Label. A Bluegrass CD which includes all new songs written by Jerry and performed by him along with some of his favorite singers – all of whom have re- corded his songs. Guests like The Oak Ridge Boys, Rhonda Vincent, Vince Gill, Ricky Skaggs & Sharon White, Darryl Worley, Del McCoury, Doyle Lawson, Sonya Isaacs, Alecia Nugent, Jamie Johnson, Lisa Shaffer, and buddies Carl Jackson and Larry Cordle. The project was one of the final nominees for the 2007 IBMA “Recorded Event of the Year.”

From the liner notes of “New Songs, Old Friends”:

“Jerry is not only a friend, in the truest sense of the word, he is also a songwriter’s songwriter… an artist that completely understands the idea of “painting a picture” using the marriage of lyric and rhyme; someone that fully grasps the art of crafting a song, rather than throwing words against the page. His paintbrush is a pen, his canvas a legal pad and his goal always another masterpiece.” – Carl Jackson (long time friend).