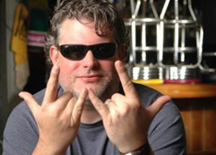 The life of a Nashville songwriter can be a bit- tersweet journey. The process of having your songs recorded and turned into hits by someone else can be validating, even empowering, but the urge to step out from behind the pen and paper and feel the heat of the stage lights for yourself is undeniable. Jason Mat- thews has arrived on stage, front and center.

The man that co-wrote Billy Currington’s No. 1 smash hit, “Must Be Doin’ Somethin’ Right,” knows that nagging feeling. “Don’t get me wrong, I love it when other people record my music,” Jason says, “but the opportunity to try it in front of people with nobody in between is pretty awesome. For me, it’s really a continuation of the creative process. I just want the opportunity to be heard myself.”

Even before the No. 1 single that earned him Music Row’s 2006 Breakthrough Writer of the Year, Jason was building an impressive catalog of hits, including cuts for Luke Bryan (“Country Man”), Julie Roberts and Trace Adkins (“Break Down Here”), Kevin Denney (“That’s Just Jesse”), Tammy Cochran (“Life Happened”), and James Otto (“The Ball”), among others. But Jason’s reputation as just a songwriter is set to change with the recent release of his debut album, “Hicotine.”

Aside from his proven skill as a songwriter, the other quality that separates Jason from many of his peers is his voice. A genuine soul singer by definition, Jason has just enough twang and attitude to disguise the fact that Motown and the British Invasion had just as much influence on his musical upbringing as Music City did.