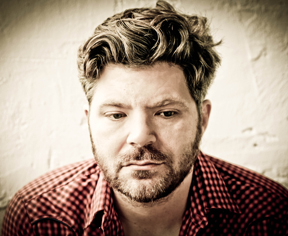 The British writer Charles Williams once said, ‘The altar must often be built in one place so that the fire may come down in another place.’

When Hugh Bryan Simpson made his first trek to Nashville from Texas it was to be a fiddler in a band. After a career that has included making records as a singer/songwriter with such diverse dragonslayers like multiple Grammy winners Dan Auerbach of The Black Keys and bluegrass giant Ricky Skaggs, touring with British folk rock phenoms’ Mumford and Sons, and having several top 5 Billboard hits like Tim McGraw’s “Better Than I Used to Be” and “Blake Shelton’s “I’ll Just Hold On” and Joe Nichols’ current chart climbing single “Yeah” , there is no doubt Bryan had no idea the ride he was in for.

Most currently, in March of 2014, under the name “The Whistles & The Bells”, Bryan released a new record of songs that sheds light on a spiritual awakening that happened in 2008 and deals with the fallout of timeless faith in a modern world. Recorded in 2012 with engineer extraordinaire Vance Powell (Jack White/Willie Nelson) it has met with critical acclaim from Rolling Stone and American Songwriter.

Bryan suggests that every song is “one more attempt to put into words what I’ve been trying to say all along.”