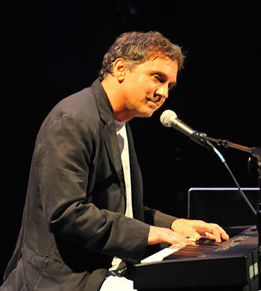 Will Robinson was born in Puerta Cabezas, Nicaragua, raised in New Orleans, and studied piano under Ellis Marsalis, the brilliant teacher/performer and father to the Marsalis brothers… Robinson also plays drums…

There, aside from managing the bar and playing the piano nightly, he concentrated on his songwriting. Thirteen months later Robinson sold the piano bar, moved to Nashville,Tn. (one of  3 choices he was considering to begin his music career), and took on a staff writer position at Maypop Music (now part of Sony Music), the publishing company of one the largest selling acts in music, the group Alabama. Since leaving there after 8 years Robinson has written for Walt Disney Music (L.A.), EMI Music (Nashville), and Friday Records Music (Nashville). He also has a sizable catalogue at Bug Music.

Over the 20 something years Robinson has been writing he has written or co-written almost 1,000 songs, including eight #1, three top 5, two top 10, one top 15, and two top 20 songs, spanning 6 genres of music being Country, Pop, Latin, Children’s Music, Christian, and European.

Playing off the obvious, for those familiar with the hit 60’s TV series LOST IN SPACE, Will has named his own various publishing companies he’s had over the years DANGER WILL MUSIC, WARNING DANGER MUSIC, DANGER DANGER SONGS, and most recently DETECT AN INTRUDER MUSIC… all BMI companies.

Robinson has served on various music related boards and panels over the years, as well as involving himself in legislative battles in D.C. to protect songwriters’ interests… one memorable trip being in the early 90s when he walked the halls with legendary songwriters such as Henry Mancini, Cy Coleman, Sammy Kahn, Lieber and Stoller, Johnny Mandel, Burton Lane, Allen Toussaint, and others.

Current residence is in Nashville, Tn.