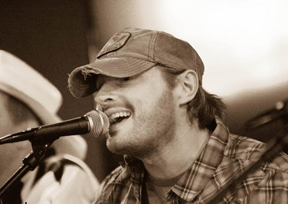 Kentucky born singer/songwriter Rusty Tabor has been performing on stage since the ripe young age of 14. After a short lived college football career he packed up and moved to Nashville in 2001 to chase yet another dream… that of signing a record deal. Shortly after arriving in Music City Rusty found himself enamored by Nashville’s songwriting community. He says, “I’d always loved performing, but it wasn’t until I got here that I truly understood what “songs” are…they’re the most beautiful picture someone can paint without a brush. They’re the most basic thoughts, the deepest emotions, stories of skeletons in closets or lighthearted love. I HAD to figure out a way to do that for a living.”

Within his first year in Nashville Rusty had landed his first publishing deal with Skidaddy Music. Billy Ray Cyrus quickly took a liking to Rusty’s songwriting style and recorded 2 songs out of that first catalog. “Back to Memphis”, a single off of Cyrus’ TIME FLIES album and soon after “Wouldn’t You Do This For Me” on his THE OTHER SIDE album. While performing at a private event one summer Rusty got a call to be the host of a nationally aired outdoors television program on the Outdoor Channel called W.F.O. Penning songs on the road while filming for the show was trying to say the least. After 3 years of television it was time to say goodbye to the camera and put all of his efforts back into the microphone. “I really hated parting with so many friends that I’d met through the show. However, I knew it was the right thing to do if I was ever going to get where I wanted to be musically.” says Tabor.

He soon found another writing home with Plus Spins Music. From that catalog came “All I’ve Got Left” that was recorded by Russell Hitchcock (formerly of Air Supply) on his TENNESSEE:THE NASHVILLE SESSIONS double cd project and IBMA male vocalist of the year winner Bradley Walker recorded “One Paragraph” for his upcoming Rounder Records album.

The future is brighter than bright for Rusty nowadays. In January of 2011 he was offered a chance to be a part of legendary songwriter Earl Bud Lee’s publishing company. “I JUMPED at that opportunity!”, he says, “Bud Lee is one of the most successful writers in the business with hits like ‘Friends in Low Places’, ‘One Night at a Time’ and ‘Who Are You When I’m Not Looking’. He’s not only a master at what he does, he’s one of my favorite people in this world.” Rusty is currently in the studio working on his own album with some of the best in the business. Tabor says “It took me a little time, some hills and valleys and a lot of living to figure out who I really am. Thanks to all of my friends and associates on Music Row I finally have the opportunity to record what I want to record, how I want to record it and with whom I want to record it with. Life isn’t good….. it’s GREAT!”

Rusty Tabor came to Nashville to be a Singer… he’s grown into an Artist…….