When you grow up in a family with a rich musical history and influence you can’t escape the im-pact it has in your life and Johnny Bulford is no stranger to the world of music. Some of that rich history goes back to his granddad, LeRoy Davis, who toured Paris in the 30s while in a jazz band. Like a scenario out of one of your favorite books, Davis whistled on the ship to pay for his passage over to the City of Lights when he was just 20 years old. He along with his 9 brothers influenced all of the family with their gift of music and talent to play just about any instrument. With an upbringing like that it was no won-der Bulford would follow the very talent that coursed through his veins from the previous generations.

The pivotal moment that changed this love and passion of the art into something more of a career occurred at age 12, when Bulford attended a Garth Brooks concert and recalls telling his mom, “That’s what I want to do”. Shortly after he picked up a guitar, learned to play and began honing his craft and focus onto songwriting. By the age of 15, Johnny was quite busy, performing all over Central Florida, landing opening act spots for artists such as Blake Shelton, Josh Turner, Gretchen Wilson and Tracy Lawrence as they brought their tours to his home state; even gigging as far north as Alabama, all the while releasing his first independent album “Southern Thing”. 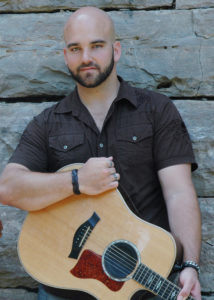 The time came when Johnny made the decision to split his time between his love of music and academics as he enrolled at the University of Central Florida in 2003 as a business marketing major with a minor in English. A self-professed nerd with high SAT scores and a Florida “Bright Futures” program scholarship in his back pocket, he managed to balance the demands of college while continuing to per-form and promote his second independent album “What Happens Here Stays Here”.

By 2004 he entered the Colgate Country Showdown, a national competition to showcase the best and brightest of fresh talent. A testament to perseverance in this industry, Johnny didn’t allow his 1st attempt of peaking at state level and his second attempt of only reaching regionals to keep him from pursuing his dream for a third time. By 2008 Johnny, while standing on the famed Ryman Stage, was awarded 1st place; earning a prize of $100,000 with his original “How Could I Not” competing against and beating out 50,000 artists from all over the United States. In the years following his win, countless trips were made to and from Nashville to develop relationships with Music Row executives all while mounting the interest of many through his heart-grabbing songwriting and smooth vocal abilities. Af-ter his win, Johnny also used his platform of attention to bring light to local charities close to his heart including the Russell Home for Atypical Children, as well as being appointed by the veteran’s group ‘Remembering the Brave’ to write a song for fallen soldiers, which continues to be played at countless affairs for America’s Gold Star families.

With only one course away from graduation, Johnny made the tough decision of choosing mu-sic above all else; realizing the difficulties in building a fan base while attending college in his home state. So he packed his truck with his guitar and all his belongings and left for Nashville to pursue his dream. Shortly after his Colgate win, Johnny secured a publishing deal with Warner Chappell Music as a staff writer; a contract he held for 9 years. After many years and countless songs penned under the Warner label, in 2018 Johnny branched out on his own as an independent songwriter.

As he continued writing and later releasing another independent album “Livin It Up” (2009), Johnny landed his first album cut on Chris Young’s third studio album “Neon” (2011) with “Flashlight” (written by Bulford, Young and Robert Arthur). Shortly after Johnny secured his first #1 hit with Lee Brice’s “A Woman Like You” with fellow co-writers Jon Stone and Phil Barton. This game-changing mo-ment for Bulford took him right into a full circle moment at the 42nd Annual Nashville Songwriters Hall of Fame Dinner where he was honored for “A Woman Like You” standing on stage in close proximity to his idol Garth Brooks. By 2014, “Lonely Eyes” a single written by Bulford, Jason Matthews and Laura Veltz was cut by Young and released on his fourth studio album “A.M.” which later rose all the way to #2 on the country charts. Bulford has continued to amass cuts over the years with Young including al-bum cut “What If I Stayed” (2015), title track “It Must Be Christmas” (2016) and “Holiday” which he co-wrote with Young and the artist cut on his 2017 “Losing Sleep” album. Bulford was even invited to play “Lonely Eyes” on the famed Ryman Stage with Young during the 5th Annual YPO Southern 7 “Evening At The Ryman” in 2015.

Johnny continues to pen hits as well as perform at writers rounds in and around Nashville and writers festivals and events worldwide. While Nashville is where he currently resides, Florida is never far from Bulford’s mind stating, “I’d really love to land a record deal, I want to get my own single on the radio. And maybe one day come home to play the Amway Arena. Not in a ‘Hey, how do you like me now’ type of way, but more ‘Hey guys, we did it!’ way. It’s been a long journey so it would be nice to bring it back home.”

Bulford’s passion of writing has taken him beyond the confines of Music Row, as he spearheads pro-jects to bring the Nashville “Listening Room” experience to his beloved upbringings and stomping grounds of Central Florida and beyond.